Alone or in groups, large rocks and boulders (18 cu.ft. to 30 cu.ft. or bigger) can be used to achieve many of the elements of good garden design. Most obviously, they impart a sense of maturity and permanence to a new garden. They also serve as interesting focal points, given their height, mass, color and many angles.

While they can be used singly, large rocks and boulders are often used in combination with others. In home gardens, you commonly see three rocks placed asymmetrically to form a scalene-triangle arrangement. The unequal distances between rocks create a natural-looking composition. Typically, there's an upright pinnacle rock drawing the eye skyward and two lower, reclining rocks anchoring the display. (In larger landscapes, you could increase the number of rocks used.) The rocks may have differing shapes, but their masses should be similar to maintain visual balance. Symmetrical rock compositions are commonly used to form the supports for a rustic gate or to mark a path entrance.

Large rocks can also be used to set mood, another important garden-design element. A sharply pointed, jagged rock, for example, can impart a feeling of excitement or power, while a flat reclining rock may convey tranquility and calmness. Shape, reflection and shadow patterns can suggest mystery and illusion, as is the case when a rock shape resembles an animal. Rounded boulders and lower-profile rocks can be used to create garden transitions. Their size provides continuity between the garden and taller trees and shrubs. When viewed next to finely crafted garden architecture, their robustness acts as a counterbalance to the scene. Furthermore, rocks and boulders serve a utilitarian function. They can be used as bubbler stones on top of a cistern and are also effective for concealing a waterfall pipe outlet.

A large rock that's been hollowed out makes an interesting bird bath or distinctive planter. When located at the edge of a pond or in a stream bed with cobbles, large rocks help reduce erosion. A single large limestone rock with numerous fissures and pockets creates a microclimate, and small sedums and sempervivums can be planted in the cracks to create a miniature garden. In country gardens, large flat rocks are effectively used as bridging stones across streams and as sitting stones at council rings and campfire circles. 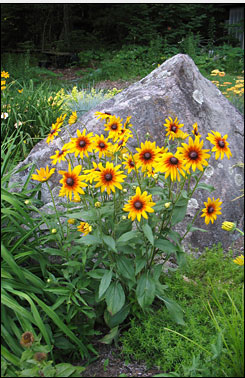 Before purchasing large rocks and boulders, it's a good idea to plot their locations on your garden plan. By doing so, you can ensure their positioning coordinates with your plant placement and that they won't hinder future garden development. In my opinion, brown, grey and terra-cotta colored rocks look best in gardens. In front yards, large rocks work well as accents in shrub beds, as frames for walkways and driveway entrances, and as marker stones engraved with your home's address numbers. Place a large rock alone in a courtyard garden as a sentinel stone or as part of a water-basin feature. Rocks used in a backyard composition are best placed away from the house to achieve proper viewing angles and to give them prominence. Placing them too near a house with a different stone or brick façade can be visually distracting and unflattering to both the house and the rocks.

Equally important is the placement of the rocks and boulders in the ground. They should emerge from the ground, appearing as if they have always been there. Simply dumping them at the site looks unnatural and can result in sinking, unstable and possibly damaged rocks. Position the heaviest side down with the best face forward and bury 1/4 to 1/3 of the rock's height. Use granular backfill to create a stable base. Every rock has its own character and posture, so take the time to study it to ensure you have the best fit. If you have rocks with less-than-desirable faces, place them closer together than you usually would to partially conceal a bad side. A sloped site can accommodate very large rocks, as the grade will conceal part of their mass.

Rocks and boulders can be purchased at garden centers and from quarries and rock suppliers. Look for ones with good shapes, attractive faces and features that add character to the material such as mineral veins, strata lines and fissures. Indicate to the supplier where you want the rock placed (not dumped). Also, confirm how the rock will be protected during shipment. Finally, if it is to be left on your lawn or driveway, put down heavy plywood.

Moving large rocks and boulders requires equipment and experience. Even a relatively small boulder or rock can be surprisingly heavy, so it's best not to try to move it using a wheelbarrow, tree cart or plate mover. Instead call in a professional who has the required cranes, loaders, stone carts, backhoes and slings. The landscaper can also prepare the site, which will save you time and labor. An option for the do-it-yourselfer, and one that I have used to move a large rock onto a steel frame in a garden pool, is to use feather rock, a lightweight porous rock that's easy to drill and grow plants.

To create visual dominance, position an accent rock alone in a cobble bed without attendant landscaping. Alternatively, soften the look of a large rock by planting a backdrop of darker cedars, yews, spruces and pines, or use ground-cover plants that help the rock merge into the surrounding landscape. When planting shrubs near large rocks, opt for ones with shapes that mimic those of the rocks. An example is azaleas planted near rounded hummock rocks. A shrub or tree that drapes over the side of a feature rock helps to soften it; weeping and standard evergreens work well. Consider a weeping Norway spruce (Picea abies 'Pendula'), the spectacular cascading 'Inaba-shidare' Japanese maple, and the slow-growing upright bristlecone pine (Pinus aristata). Avoid large spreading shrubs and vines that cover the rock and require repeated pruning. The goal is to complement the rock, not hide it entirely. I once saw a dead stump and its wizened roots positioned on the top side of a large accent rock to give it a mystical appearance and create an interesting effect.

Large accent rocks and boulders lend a sense of permanence to the landscape. Their infinite shapes, colors and textures create interesting compositions for both large and small gardens. Consider adding one, or several, to your landscape.