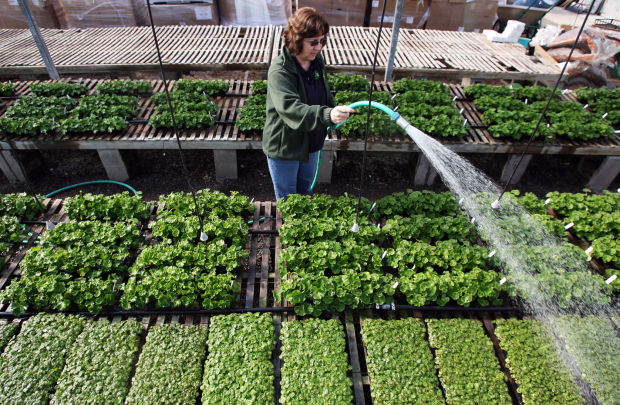 QUEENSBURY — Dot Eggleston checked out a customer in the Binley Florist shop last week, acting as cashier just about 20 minutes after she was pointing a hose down at palettes of geraniums in the greenhouse.

The floral shop and garden center’s employees are trained in a variety of different tasks — one of the strategies owners have used to keep the business afloat for 120 years.

“Cross-training our people for every job is really critical,” Binley owner Wally Hirsch said. “That helps balance out the slow times.”

Eggleston started at Binley as a seasonal employee, then began working there part time and eventually worked her way up to being a manager.

The business operates as a flower shop and garden center, which have some of the same quiet and booming times, but also different ones.

The slowest time is typically in January, and one of the major challenges for the seasonal business is to generate enough cash flow during the busy times to sustain it through the slow times. That, and ensuring the plants bloom at the right time, are probably the two biggest challenges, Hirsch said.

Binley Florist was established in 1893 in its original location on Grant Avenue in Glens Falls. The 120-year-old business has only been operated by two families in its history — first the Binleys, and then the Hirsches. Hirsch’s father started working for Binley in the 1930s, eventually buying a half-interest in the company, and then buying out the rest of the company in the early 1960s, Hirsch said.

In the 1970s, the Hirsches bought an old gas station at the corner of Quaker Road and Dix Avenue in Queensbury, on the roughly seven-and-a-half acres where the business stands today. A lot has changed in the century-plus that the business has been operating in the area, but it’s reason behind it remains the same.

The business has about eight employees, which will swell to 25 in the late spring and early summer.

The business is reliant each year on seasonal workers, including the same two greenhouse workers from Mexico who have been spending six months of the year for the past decade running the 25 Binley greenhouses. They typically come to the area in early March and stay through September, working at Binley through the guest worker program, Hirsch said.

“If there’s a plant, they’ve handled it. It would be hard to run the business without them,” Hirsch said. “There are a lot of rules to the program, a lot of paperwork, but it’s key to how things work.”

Hirsch and Eggleston have done some preliminary work in the greenhouses by the time they arrive — planting and watering geraniums. The real planting push starts in March, and by April 1, the majority of the 25 greenhouses will be filled with plants.

Binley also hires a group of local seasonal workers in early May who work in the shop during the busiest time of the year. Seasonal workers are then laid off, usually starting in July, when the demand starts to wane.

The remaining employees then pick up any slack when owners cut down on the number of employees seasonally.

“Otherwise, I could never get him away for vacation,” said Kate Hirsch, Wally’s wife, a retired teacher who also helps run the business.

Arthur Binley founded the company in 1893.

Hirsch estimated Binley Florist is among the top 30 oldest florist shops in the country. Trade publication Florists’ Review tracks established floral businesses around the country, and published a list several years ago that put Binley among the oldest dozens of florists in the country, he said.

Since Arthur Binley founded the company in 1893, only the Binley and the Hirsch families have run the company. But when 65-year-old Hirsch decides to retire, another family may get added to that list. His two sons and daughter have their own careers, and he doesn’t anticipate any of them will take over the family business, he said.

“I’m probably the end of the line,” Hirsch said. “Probably sooner or later, it will change hands.”

Check out the photo gallery!