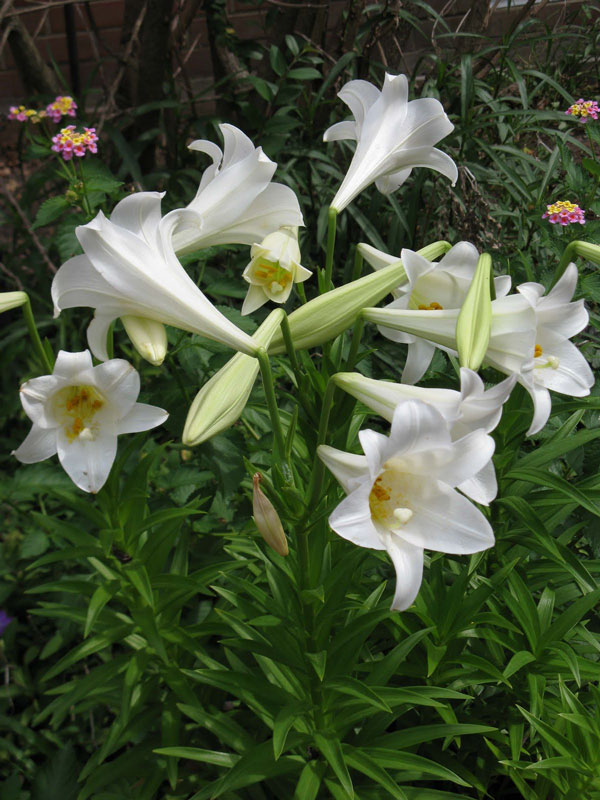 Flowers play an important role during Easter time. Lily plants can be found on the altar and in many homes, with the beautiful trumpet-shaped white flowers symbolizing purity, virtue, innocence, hope and life - the spiritual essence of Easter. But, few people know how these flowers came to play their part for the holiday.

Easter lilies are native to the Ryukyu Islands of southern Japan, and the islands of Okinawa, Amani and Erabu. The flowers were introduced to England in 1819. In 1853 a Japanese missionary gave it to a friend in St. George, Bermuda who later marketed it. The Bermuda lily was introduced to America in 1880, but a severe virus in 1898 ruined the Bermuda lily industry. Lily bulb production came to the U.S. in the late 1800s, and was centered in both Japan and the southern U.S. after 1898. When the Japanese attacked Pearl Harbor in 1941, the Japanese source of bulbs was cut off. As a result, the value of lily bulbs greatly increased and many people who were growing lilies as a hobby went into business. The Easter lily bulbs at that time were called "White Gold," and growers everywhere attempted to cash in on the crop. By 1945, there were around 1,200 growers up and down the Pacific coast, from Vancouver, Canada to Long Beach, California. Over the years, the number of Easter lily bulb producers diminished to just ten farms in an isolated coastal region on the Oregon-California border called the Easter Lily Capital of the World.

Lilies themselves can be found mentioned prominently in the Bible. When Eve left the Garden of Eden she shed real tears of repentance, and from those remorseful tears sprung up lilies. Often called the “white-robed apostles of hope” lilies were also found growing in the Garden of Gethsemane after Christ's crucifixtion. White lilies are said to have sprung up where drops of Christ's sweat fell to the ground from the cross. Traditionally, Easter Lilies are arranged in churches, to commemorate the resurrection of Jesus Christ.

One of the greatest challenges for Easter lily producers today is to get all the plants to bloom at the same time and just in time for Easter! This is especially difficult because Easter comes at a different date each year. Growers measure the progress of Easter lilies every day. They look for certain signs of development, such as when the first flower buds appear, the number of new leaves that unfold everyday, and the height of the plants. These progressions determine whether or not the plants will be ready for sale at just the right time. For example, by counting the leaves on each plant, growers can predict how many days until that plant will flower. If the plants are growing too slowly, or too fast, the grower must adjust the humidity and temperature of the greenhouse. If some plants develop faster than others, those plants may have to be placed in a cooler until the other plants catch up.

Nowadays, other flowers have come to be associated with Easter, such as tulips, iris, gerbera, and even roses. Generally, spring time colors such as yellow and orange are popular. By the way, did you know that Easter lilies can be planted out side and will flower each summer?