Flower of the Month 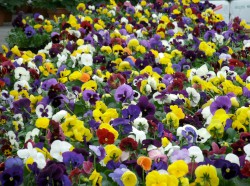 As the old saying goes “every dog has his day”, but did you know that each flower has it’s month? The symbolism of flowers has a history going back to at least the 1600’s. Here is a brief list of of some flowers and their “assigned” month. Feel free to make up your own list.

January: Carnation
Carnations are traditionally worn on the Brisish Mother's Day, either in pink to honor a living mother or white in memory of one who has passed on. In a bouquet, this flower stands for pure love, devotion and dedication. Just don't include any yellow carnations. (That would be "flowerese" for disdain.)

February: Iris
The warm, deep color of the iris is a harbinger of spring and symbolizes respect, honor, wisdom, hope and valor.

April: Daisy
Ancient legend says that a nymph wanting to escape unwanted attention from a satyr transformed herself into the daisy. Ever since, this flower has been the symbol of simplicity, innocence and modesty.

May: Lily of the Valley
According to Bibilical folklore, Eve's tears after being evicted from the Garden of Eden turned into lilies of the valley. This delicate bloom stands for purity, sweetness and humility.

June: Rose
Ancient Greeks believed that Aphrodite, the goddess of love, gave a rose to Eros, the god of love — hence the rose's traditional association with that emotion. Depending on its color, a rose can symbolize one of many facets of love. Red roses signify passion; dark pink, gratitude; light pink, admiration; and white, innocence, purity, secrecy and friendship. Rosebuds express purity, youth, beauty and girlhood.

July: Larkspur
Perhaps because its flowers tend to be fragile and relatively short-lived in the vase, larkspur symbolizes fickleness and levity. (You might want to skip this one in your Mother's Day arrangement.)

August: Gladiolus
Named for the gladiator's sword, which its long, graceful stalk resembles, the gladiolus signifies preparedness and sincerity.

September: Aster
In ancient times, it was believed that burning aster leaves would drive away poisonous snakes. This classic autumn bloom is associated with patience and daintiness.

October: Marigold
Once considered the most sacred of flowers, marigolds were placed around the necks of holy statues in India. The blooms signify comfort in times of pain and grief.

November: Chrysanthemum
Chrysanthemums, grown by the Chinese for more than 2,000 years, symbolize the sun, compassion, friendship and secret love. This flower is also a powerful antiseptic and antibiotic used in traditional Chinese medicine to treat high blood pressure and angina.

December: Narcissus
Though the mythical Narcissus was notorious for his self-absorption and vanity, the pure white flower named for him symbolizes respect, modesty and faithfulness

Before I go, I want to remind you to join our VIP Club on your (message capable) phone and be the first to hear about special events and sales. Just text Binley to 40158 and you’re in!