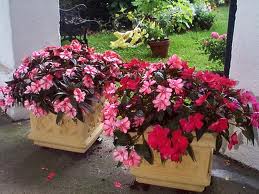 When looking for an annual plant which will bloom throughout the summer months, the general opinion is you should look for Impatiens. An absolute favorite for both the fanatic and the amateur gardener, Impatiens are sold by the millions throughout the country and perhaps worldwide. They can be readily found as seeds and transplants, in hanging baskets and as bedding plants. Because these plants are so easy to grow, are so readily available, so cheap to get, come in virtually every shade of the rainbow (minus a couple of colors, that is), make the garden sparkle like none other and are ever-blooming, they will never be surpassed in the annual bedding plant department.

Impatiens: The foliage on this plant is a medium green with a slightly dull sheen. Leaves are ever-so-slightly serrated on the edge with barely visible light green or white veining. The oblong leaves are approximately 1-2 inches wide and about 1-3 inches long depending on cultivar. The 1-2 inch wide flowers come in single, semi-double and fully double forms with the fully doubles at times called Rose Impatiens. These truly look like perfect miniature roses. An extremely pretty variety and a relatively good substitute for those who simply can't grow a real miniature rose.

Impatiens are said to be shade plants but this isn't quite right. They like sun but not a very harsh one. They will, however, wilt if left in full sun all day. Morning sun with afternoon semi or full shade, especially in the hottest summer places, will make them quite happy. They like a rich, well draining yet moisture retentive soil. They do not like to be dry but they also rot easily if sitting in water.

New Guinea Impatiens: Growing requirements are almost the same except that New Guineas are a tad more tolerant of sun. The flowers are also rather similar in shape and size and come in about the same colors, possibly a few less shades but hybridizers are constantly coming up with new colors. These blossoms, however, are produced less abundantly than regular Impatiens. Like the regular Impatiens, New Guineas do not require any deadheading: although if they become leggy pinching back is suggested.

The best way to differentiate the New Guinea from the regular Impatiens is the foliage. Leaves are more slender on the New Guinea Impatiens and in some cultivars rather showy and variegated. Leaves can have a reddish, purplish or bronzy tint to the glossy, darker, more vibrant green. Veining is more pronounced and the stems are generally burgundy in color. The leaves are about 3-5 inches long depending on cultivar and 1-3 inches wide. New Guinea Impatiens grow a bit more upright than the regular kind and about 1-2 feet tall with a 15 inch spread.

If you look at them both side by side you can tell right away the differences between the regular and the New Guinea Impatiens. But if you want to know which is better you'd have to decide that for yourself by trying them both. Each gardener has his or her own idea after all.