Restoring Vigor in the Perennial Garden 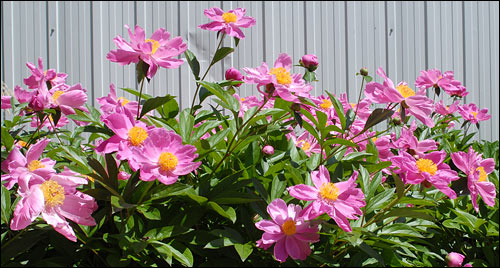 Perennials are a great investment in any garden, but once established, perennials can double and sometimes triple in size every year, creating a cluttered garden composition. Separating a parent plant into several pieces with their own roots and new crown to produce exact copies of that perennial is one way to deal with the clutter.

Overcrowding isn't the only reason to divide perennials. When there is a significant decrease in flower production in the parent plant or when the crown of the plant starts to separate in the middle and the newer surrounding shoots produce more flower buds and are healthier looking, division will rejuvenate the aging parent plant, strengthening it and boosting flower production.

A plant in full leaf is not only bulky, but heat will put excessive stress on both the developing offspring and the recovering parent, making summer the least favorable time for division. It's best to tackle this when the plants are dormant or when the weather is mild, such as in early spring once new shoots are beginning to emerge from the crown or when they are two or three inches tall. However, early fall is a good time to divide those plants that flower in late spring or summer. Since the plant has already flowered for the season, there is less stress put on the plant when divided in the fall and the plant still has time to establish its roots before the winter.

Given that excessive transpiration rates will cause more stress on full-grown plants than is necessary, some gardeners favor cutting back the foliage of such plants as irises and lilies to 4" to 6" above the ground. The remaining 4" to 6" of foliage will provide enough nourishment to the roots through photosynthesis; however, feeding the new plants with a water-soluble fertilizer high in phosphorus will also provide nutrients essential for establishing healthy roots.

Choose an overcast and cool morning to dig up and separate your perennials, rather than a hot and sunny day. Dividing on a cloudy day will keep the roots moist and the foliage from wilting excessively.

Aim to divide plants three to four weeks before the first hard frost or major snow fall. This will allow enough time for parent plants, and new plants, to get established before the ground freezes. To ensure winter survival of your new plants, make sure that they are well watered, and protect the developing crown from the cold and desiccating winds with a layer of mulch.