A Slice of Advice: The Best Tomatoes for your Garden 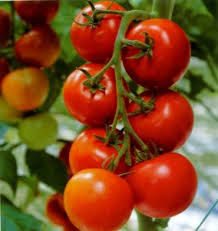 There are more than 700 kinds of tomatoes to choose from, so let’s just review the basic types. Take a look at this short list of just a few to see how many you know and love (and are in your garden):

Globe: Big, round and oh, so red. These are the all-purpose tomatoes that most people think of for slicing. Tasty varieties like Beefsteak, Rutgers and Brandywine range from typical palm-size up to two pounds.

Heirloom or Hybrid? It’s not too complicated. Heirloom tomatoes are old varieties that produce viable seeds repropargate the same tomatoes from. Some say they have the absolute best flavor when picked at the right time. Hybrid varieties have been specially developed for desirable characteristics. Either way, you can't go wrong.

Vine or Bush? It’s a matter of space – vines ramble. What suits your garden?

Early or Late-Season Varieties? Heartier plants that can go into the ground sooner, let you harvest earlier. Choose both kinds and harvest well into Autumn!

After you select the types of tomatoes you like best, follow these easy tips to get the best from them:

Know the line-up? Start the rotation. Like baseball, except this part: don’t plant tomatoes over and over in the same spot. It tends to promote plant diseases. Bright is right. Don’t skimp on the sun – you won’t have it made in the shade. Tomatoes need sun all day. Start with a healthy appreciation. Buy plants that are healthy. Not ones that are slightly yellow, partially withered, overgrown or stunted. Things typically get worse, not better.

Plant in succession. Unless you like getting buried with ripe tomatoes all at once. Plant at three week intervals in the Spring. You’ll get a longer, more controlled harvest. Pinch off those little suckers. Get rid of useless little shoots at the base of the plant that won't flower or produce. They just sap the plant.

Feed ’em right. Some chemical fertilizers blast your tomatoes with super doses of nitrogen. This will produce overgrown, spindly plants with fewer fruit. Use a safe, slow-release, organic plant food with the right blend of essential nutrients to promote growth and resistance, such as Espoma Tomato-tone®.

Be O.K. with an occasional drink. Directly and fully soak the soil when you water – not the foliage.

And not at night, which can foster disease. Don’t water every day if the soil is staying too wet or mushy.

Raise the stakes. Support is good. It keeps stems and vines from kinking or collapsing, lets air circulate and provides better access to fruit. Put stakes or cages in early when it’s easier and safer for the plant.

Pick when it’s just ripe. Not too green and not beyond fully red. That’s the key to real flavor.